THE POWER OF ME TOO 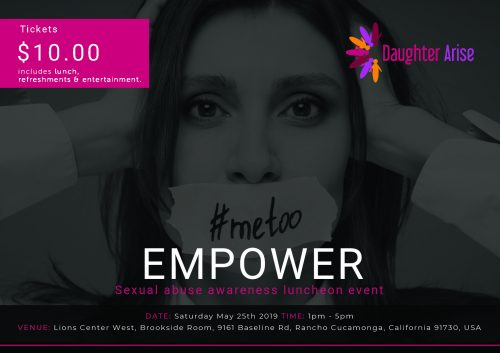 Recently I hosted an event in California to empower survivor’s sexual abuse. The theme of the event originated from the ‘Me Too’ movement that has gained huge attention in America because it has given survivors of all abuse a collective platform to speak out. Organising the Empower awareness event was logistically a huge task for me to accomplish. I live in London, and the time difference and not knowing anyone in California presented huge challenges, but my motivation to deliver this event kept me focused and I delivered.

Daughter Arise was able to partner with other organisations in California. Project Sister works tirelessly to empower children by giving them a voice by teaching them about their bodies and raising awareness of what the signs of childhood sexual abuse are. San Bernardino Sexual Assault Services raise awareness of how childhood sexual abuse affects adults in the aftermath. It made for sombre listening to hear that a large proportion of childhood sexual abuse survivors have over 50 sexual partners before the age of 30yrs old. Ariana shared that whilst everyone is able to make their own choice about sexual exploration, in the case of a large proportion of CSA survivors it is more than not, not a choice but a learned behaviour, a destructive cycle introduced to them through the appalling act of sexual abuse that has been accepted as a way of life. We also had survivors of CSA share their stories. Singer Jackie Lynn, Author Misty Griffin and I shared how we came to be sexually abused, how it affected our lives and how we found hope in the aftermath. Jackie and Misty’s honesty and courage was so inspirational and empowering. It was not easy for them to share their personal stories but you could clearly see the impact it had on the people that attended the event. 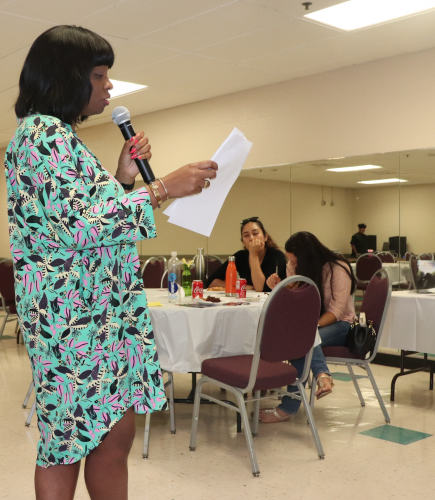 I assumed because America was a much bigger place than England that childhood sexual abuse was easier to address, but on speaking with the organisations on the ground it clearly is not, a lot of people are in as much denial as people over here. One thing remains the same though. Healing comes in different ways for each survivor and each survivor reaches their own realisation to get to a point of acknowledgement. It can depend on a number of different variables that often comes from outside circumstances rather than what the survivor believes is personally best for them.

In spite of the continuous battles to have sexual abuse acknowledged with the seriousness it deserves, one thing that stands out and gives hope throughout all the challenges that society, communities and people bring; and that is empowerment is key. Through my company YEME Empowerment I facilitate empowerment by hosting these events, providing empowering communities to encourage survivors and those that support them. The Me Too movement has been treated with disdain by many people that believe it instigates false allegations, but I have seen it do something powerful. This movement has broken the isolation many survivors have faced and helped people find their voice, and I believe society’s un-comfortableness with acknowledging sexual abuse is the reason they are resistant to this movement. No matter how distressing people find it to face this subject it is important that we always find the greater good in what was meant to destroy us. We can save the next generation by using our experiences to teach others.

To receive an email notification when Yvonne publishes a post, just complete the easy to use form with an email address.