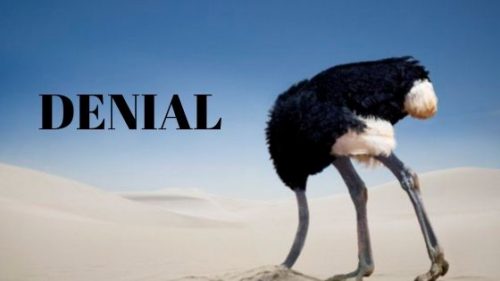 In this monthly blog post, CSA Advocate Niki Fayase shares her thoughts on denial and its devastating effects in regards to the difficult and complex issue of childhood sexual abuse.

Denial is a subject that does not seem to be openly addressed in CSA. (Child Sexual Abuse). Yet the impact and fall out of denial on survivors are huge. Studies show that children need to feel that they are believed to heal. They need to be told that this is not their fault. That they are not responsible for the abuser’s actions so they are not left with feelings of guilt, shame and worthlessness. (Helping your sexual abused child cope, 2019).

Fortunately, many non-abusing parents/carers believe their child and are able to protect and support the child’s healing process. However, in my experience of working with and supporting families affected by CSA, I have found that some family members and even professionals involved in CSA cases may dismiss the truth. Clients have told me of being shamed and blamed by professionals who were meant to be supporting their child. Some spoke of being labelled as trouble makers or liars not just by the abuser but also by friends and family members, thus denying the child’s traumatic experience.

Denial can also take the form of dismissing the child’s words, by downplaying the seriousness of the situation or just by asking the child not to talk about it. I have often wondered why this was as silencing or burying a traumatic event can negatively impact one’s mental and emotional well being. To me, this seems to make the already violated child feel violated all over again. Denial prevents the survivor from feeling validated or reassured that none of this is their fault. Instead, it makes the child feel broken, confused and alone, especially as it may have taken everything the child had to sum up the courage to disclose the first place.

It would be easy to blame the dismissive non-abusing adult and accuse them of complicity with the abuser. However, the reality is that they may have been groomed and brainwashed by the perpetrator. To abuse children, perpetrators will first seek to establish a support system around them. Thus, if they are found out, they have an army of defenders fighting their case. Or they present a face of such honourability and charm that any disclosure is immediately disbelieved.

Seeing this public outcry, it can be argued that he managed to groom a nation. He has people defending him that do not know him personally and have never met him. Yet, if asked if they would leave their children with him overnight, their answer is a resounding no.

To some extent, denial is also prevalent during CSA court cases. The onus is on the survivor to prove their case. The defence lawyers questioning can be gruelling and horrific, often leading to an assassination of the survivor’s character. There is no justification in trying to destroy an innocent person’s credibility. This is why survivors struggle to go through court cases. I feel perpetrators’ lawyers bank on this to acquit their clients. Just because an abuser is found not guilty, doesn’t mean the abuse did not take place.

Denying a child’s experience is so damaging to their fragile psyche. Children are meant to feel safe and protected in order to develop a sense of self. However, if they tell and their words are then dismissed or not validated, their sense of self can be fractured. This can have very serious long term implications on their mental health, quality of life and ability to trust another human being.

To receive an email notification when Yvonne publishes a post, just complete the easy to use form with an email address.